FLM can be opened by running the included .py script or .bat file. The latter automatically detects and uses the latest available version of Python. Upon opening one of these files the user should see a command prompt window as well as a graphical user interface (GUI; Figure 1). 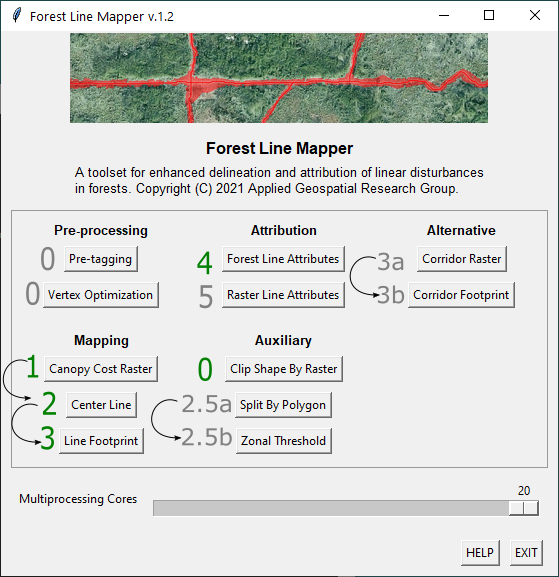 Figure 1. FLM graphical user interface (GUI) with tools enumerated in sequential order as they would be normally used. Main tools (1, 2, 3 and 4) are numbered in green and connected with blue arrows. Optional tools (0, 2.5a, 2.5b, 3a, 3b and 5) are numbered in gray and connected with gray arrows. Output center lines are obtained in tool 2, output footprint polygons are obtained in tool 3. Lines receive attributes in tool 4. Tools 3a and 3b serve as alternatives to step 3.

There are currently four main categories of tools included in the FLM package: mapping, attribution, auxiliary and alternative. The two former are the main steps and the two latter are the optional steps outlined in Figure 1. Specific tool descriptions, inputs and outputs are outlined in the documentation section of this guide.

FLM tools require ESRI ArcGIS to be installed with the Spatial Analyst extension in order to run. ArcMap uses Python 2.7, which is compatible with FLM tools. ArcGIS Pro uses Python 3, which is also compatible and enables FLM to run approximately 20% faster.

Once mapped with FLM tools, forest lines can receive attributes which relate to their spatial properties. Additional information may allow for greater insight on forest line conditions. FLM provides a series of standard line attributes as well as the capability of deriving attributes from external data provided by the user. Table 1 provides some examples of standard attributes and a full list of currently supported attributes is available in the documentation section of this guide.

If a human interpreter is not able to see the footprint on the CHM it is likely that the FLM tool will also not be able to properly map it without fine-tuning. Regenerated forest line segments can either be removed from the inputs or digitized on a smaller scale (adding more vertices, see step 3 in "Workflow").

FLM can also be used to map the footprint of wide linear features such as roads, pipelines and power-lines (up to 80 meters wide) but this requires fine-tuning the input parameters (usually with a larger corridor threshold, and sometimes including additional input lines to capture separate portions of the same feature).

On the other hand, null cells are useful to represent unmapped regions and should be used (as opposed to extreme numeric values such as -9999 or +9999) especially in case there are "data holes" in the input raster.

Landscape feature polygons (optional input listed above) may be used to split forest lines via the included "Split by Polygon" tool, enabling improved results on terrain with varying tree density. The included "Zonal Threshold" tool can help with fine tuning individual line corridor thresholds (see step 5 in "Workflow" below) to prevent the footprint polygons from invading the surrounding forest in sparsely vegetated areas.

Therefore, to avoid this effect, forest lines surrounding these features may have to be digitized on a smaller scale (1:2000), with more vertices than other input lines (see step 3 in "Workflow" below).

This effect is worse if the input lines are too large-scale (e.g.: 1:20,000). To avoid this issue such corners may have to be enforced with additional vertices (see step 3 in "Workflow" below). Note that this effect is expected to be minimal, and may not be reflected in the output polygons even though output lines are affected.

The scripts included in this toolset make use of multiprocessing to split the task of mapping and attributing lines into multiple parallel processes. This factor allows several CPU cores to work at once dramatically reducing the processing time on extensive application areas. By default the maximum number of available cores is used by the FLM. This is usually desirable to process large inputs faster, but may temporarily slow down other processes in the computer. If the user wishes to specify the number cores to be used by FLM tools they can find this option within the user interface.